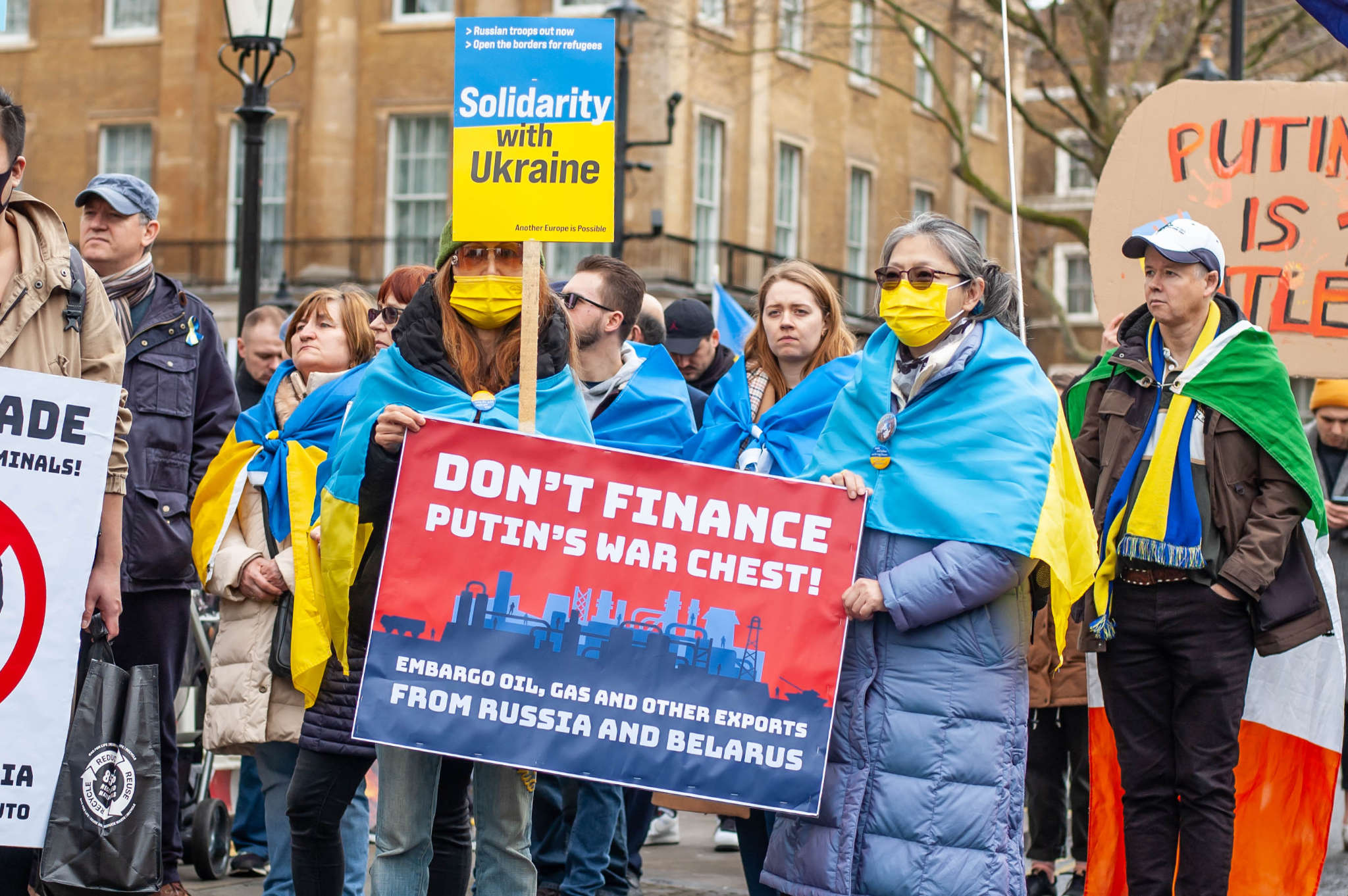 Russia’s energy policy has discriminated against Ukraine for years, using the Nord Stream 1 and the since-canceled Nord Stream 2 pipelines to bypass the country and weaken its position.

Part of Putin’s energy strategy prior to his invasion of Ukraine was to reduce gas imports to Europe, which resulted in high gas prices and a relative shortage.

Russia’s premeditated aggression created a sense of urgency to quickly collect contractually negotiated quantities for fear of imminent supply shortages or outages. European energy companies had long painted themselves into a corner, and even the horrific images of civilian death and destruction have not stopped them from pumping millions into Russia’s war machine.

The very same companies refused to begin transitioning out of fossil gas and have for years delayed the move to renewable energy sources.

This strategy has deepened the EU’s energy dependence on Russia. It has also directed exorbitant funds into state-controlled or state-aligned Russian companies. The profits have helped finance Putin’s attack on Ukraine, which began with the 2014 occupation of Crimea; his brutal intervention in Syria; his ever-growing nuclear weapons arsenal; and the security apparatus his regime has used to crack down on Russian civil society.

How are these companies involved in Russia's energy business?

The Finnish company Fortum and its German subsidiary Uniper import enormous amounts of Russian coal and gas. Uniper is one of Gazprom’s biggest customers and has long-term contracts for 200 TWh of fossil gas. These long-term contracts are running until mid 2030. While the company has said it will not conclude new long-term gas delivery contracts, its ongoing business remains untouched. From January- April 2022 Uniper received 86 TWh of Russian gas under these contracts. Uniper has opened a so-called K account at Gazprombank to enable an exchange of its Euro payments in rubles as required by Russia. Uniper’s Russian subsidiary Unipro and Fortum continue operating 12 coal- and gas-fired power plants in Russia. Uniper recently recorded a full impairment loss on its loan to Nord Stream 2. Uniper has decided to not extend its Russian coal supply contracts but it still imports coal from Russia. In 2021, Uniper purchased about 5.8 million tonnes for its own power plants, with around 50% imported from Russia. From August 2022, Uniper will have to obey the European sanctions on coal.

Wintershall Dea is 72% owned by German chemical giant BASF. The German company produced 47.8% of its oil and gas in Russia in 2021, and it intends to keep up production in its joint ventures with Gazprom and Lukoil in and outside Russia. Between January and March alone, Wintershall made €400 million producing Russian gas and oil, a five-fold increase over the same period in 2021. Like Fortum/Uniper, it wrote off its stake in the gas pipeline Nord Stream 2 – but still holds its 15% involvement in Nord Stream 1. Wintershall says it will not pursue any new gas and oil projects in Russia, but this does not affect its ongoing production and its many joint ventures with Russian companies in and outside Russia. Since the start of 2022, Wintershall’s pipes have transported over 28 bcm of Russian gas across Germany. Using German government monthly price figures, the value of this gas equals over €14 billion.

The German company procures a significant portion of its gas imports from Russia’s Gazprom. EnBW has two long-term contracts with the Russian company. The longer one runs until 2030. EnBW also holds a majority in VNG, the Leipzig-based gas importer In 2021, EnBW imported about 495 TWh of natural gas, 20% of which directly from Gazprom. In addition, EnBW procures gas via gas hubs for its business in Germany. This gas likely has the average market share of gas from Russia (at the beginning of June 2022 about 35%). While the company will not conclude new long-term gas delivery contracts, its ongoing business remains untouched. EnBW has opened a so-called K account at Gazprombank to enable an exchange of its Euro payments in rubles as required by Russia. The majority of EnBW's hard coal imports come from Russia, too: 3.57 million tons of a total of 4.19 million tons in 2021. In its public communications, EnBW seems to condemn Russia’s attack on Ukraine, but it also emphasizes the importance of maintaining energy security, which reeks of business as usual. But EnBW will have to obey the European sanctions on Russian coal from August 2022.

The German company’s gas imports from Russia continue undisturbed despite the war on Ukraine. RWE has a long-term contract with Gazprom to provide 15 TWh of fossil gas by 2023, out of which 50% will be delivered until April 2023. RWE has opened a so-called K account at Gazprombank to enable an exchange of its Euro payments in rubles as required by Russia. As early as March, the British government had imposed sanctions on the Russian railways that transport the coal to the Russian ports. As a result, RWE, which also operates in the UK, has not been able to accept coal since March without breaking Western sanctions. Accordingly, the group had to write off its supply contract with Russia: This burdened the quarterly balance sheet with 850 million euros. The company’s planned joint venture with fossil giant Novatek for the supply of blue hydrogen is currently on hold but not officially canceled.

Enel announced at the end of June 2022 that it had sold its entire 56.43% stake in Enel Russia to PJSC Lukoil and Closed Combined Mutual Investment Fund “Gazprombank-Frezia.” The sale is expected to be closed by the end of the year. Its value is about 137 million euros. This means that Enel will dispose of all of its Russian power generation assets that supply electricity and heat to industrial and private consumers with the sale.

The French company continues to import Russian gas and holds a 9% share in the pipeline Nord Stream 1. It also financed the now-defunct Nord Stream 2 pipeline and accounted for a credit loss of its 987 million Euro invested into the project. Engie has no less than 5 major long-term contracts with Gazprom Export. Imports from Russia accounted for 20% of the company’s gas sales in 2021. Engie has reached an agreement with Russia’s Gazprom to pay for Russian gas in rubles.

The Italian company continues to import Russian gas. Eni opened a Euro plus a Rubel account at Gazprombank, going even further than other companies in fulfilling Russians requests to pay in Rubels for gas. The energy group has suspended purchases of Russian oil, including for Germany’s Bayernoil refinery, where it has a minority stake. Eni is involved in several international joint ventures with Russian energy conglomerates. Existing joint ventures with Rosneft linked to exploration licenses in the Arctic area have already been frozen for years, due in part to the international sanctions imposed on Russia since the 2014 occupation of Crimea. Eni announced it would divest from the Blue Stream pipeline in March 2022, but this move was planned long before the Russian invasion.

The German company does not have long-term gas supply contracts with Russia but bought gas from traders that included Russian gas. In March 2022 E.ON announced that it stopped purchasing new volumes from European trading companies who trade Gazprom gas. E.ON holds a 15.5% stake in the pipeline Nord Stream 1 through its pension fund and has not shown intentions of backing out of the project.

The Norwegian company had been a major player in Russian oil production. On 25th of May 2022, Equinor exited all its joint ventures with Lukoil and Rosneft in Russia. It also stopped trading oil and gas products from Russia and announced an impairment of USD 1.08 billion on the balance sheet as of 31 March 2022.

The Norwegian company is involved in joint ventures with Gazprom, which produce gas in the Netherlands and the UK. It has not announced divestment plans.

The Austrian company produced 100,000 barrels of oil equivalent per day in Russia. OMV held a 24.99% interest in the Yuzhnoe Russkoe gas field. After Russia invaded Ukraine, the company wrote off this interest and also terminated negotiations with Gazprom for a 24.98% stake in Block 4A and 5A of the Urengoy gas and condensate field. OMV also wrote off its stake in the now-defunct Nord Stream 2 pipeline. In total, OMV had to write off 2 billion Euros. However, its gas production partnerships with Russian companies abroad as well as its gas import contracts with Gazprom continue undisturbed. In 2018, OMV's contracts with Gazprom for gas supplies until 2040 were signed, covering about 80% of domestic demand. The take-or-pay clause of these contracts covers an unusually high approximately 95 per cent of the usual delivery quantities. OMV has also opened a so-called K account at Gazprombank to enable an exchange of its Euro payments in rubles as required by Russia.

The Danish company announced a full ban on hard coal imports from Russia soon after Russia started the war. Until June 2022, Ørsted still purchased gas under its long-term contract with Gazprom Export. While other gas purchasing companies gave in and opened accounts at Gazprombank, Orsted refused to follow the procedures imposed by Russia. Gazprom accordingly stopped the supply of gas to Orsted beginning of June 2022.

The French company is deeply involved in the Russian gas market and owns a 19.4% stake in gas major Novatek. TotalEnergies collaborates closely with Russian gas giants on a number of LNG projects, such as Arctic LNG 2 and Yamal in Russia and a couple of others abroad. Total also has a 20% interest in the onshore Kharyaga oil field, which is in production and owned by Zarubezhneft. The company will not enter into or renew contracts for Russian oil and petroleum products. It will halt all its purchases of Russian oil and petroleum products as soon as possible and by the end of 2022 at the latest.

The Geneva-based global commodities trader stopped all purchases of crude oil from Rosneft by May 15th. It is still supplying Russian petroleum products to European customers. It still maintains passive investments in Russia. In 2020, Trafigura took a 10% stake in Vostok Oil LLC, a massive Arctic oil project in Russia, for €7 billion. The company is currently reviewing that investment and will not pursue any new investments in Russia.

The Swedish company buys its gas supplies from European hubs; thus they purchase about the actual market share of Russian gas in the mix (at the beginning of June 2022 about 35%). 89% of Vattenfall’s hard coal imports in 2020 came from Russia. Between 2018 and 2020, Vattenfall had business relationships with the Russian coal companies SUEK, KRU and SDS Ugol. The coal plants Reuter West and Moabit in Berlin currently run on 85% Russian coal. A final coal delivery arrived at the end of March 2022. Vattenfall does not intend to make any further coal purchases from Russia and will have to obey the European sanctions on Russian coal from August 2022. End of February 2022 Vattenfall decided that no planned deliveries from Russia to their nuclear power plants will take place and that they will also not place any new orders until further notice.

Call on energy companies to finally step up, take responsibility and help end this war.